Chicago is America’s third largest city. In 1833, Chicago had a population of about 4,000 people. However, by the end of the century, there were over 90,000 people. [1] Chicago’s location is one of the biggest reasons why its population was increasing so quickly. People were able to enter Chicago easily because the Great Lake is connected to Lake Michigan. For instance, Chicago has been proven to be a transportation hub as it was chosen to be the location for the 1895 Race of the Century (a 54-mile automobile race). The city is known as the main crossover point for river and rail shipping lines since 1849. [2] Therefore, participants of the race were able to ship their cars to Chicago. Additionally, the ample cobblestone streets of Chicago were well kept, which allowed for a safe race. 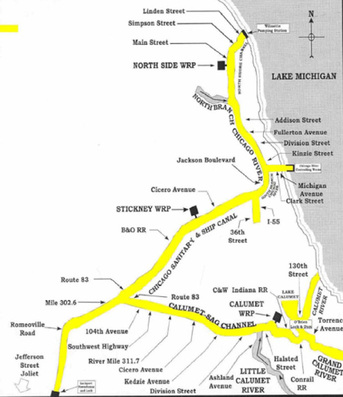 Figure 1. The connection between the Chicago River and Lake Michigan. Retrieved from: http://news.medill.northwestern.edu/chicago/govt/section.aspx?sid=889

With the influx in city growth, Chicago had to start implementing transportation plans in order to sustain transportation and preserve human well-being. Railroads were constructed in Chicago around the 1850s, which had converted the large town into a large city. Between 1880 and 1950, most Chicagoans, mainly the middle-class and a few of the working poor, relied on public transportation to get to work while the affluent Chicagoans rode on horse-drawn carriages that went about three miles per hour. While Chicago in the 1850s wasn’t nearly half the size it is now, the four railroads that existed were considered “suburban commuter stations.” People who lived about three to six miles from the center of town were considered to be suburban commuters and utilized public transportation on the four existing railroads. Most Chicagoans lived only about 1.5 miles away from the city center. By 1916, the average Chicagoan utilized mass transit almost everyday of the year as the city was expanding. The average person now lived about 4.5 miles away from the city center. The increase of Chicagoans living further away from the city center as the years progressed proves that the population of Chicago was expanding quickly. [3] 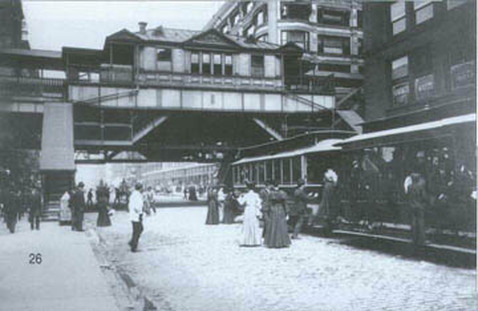 Figure 2. This is one of Chicago's elevated railway station, located at Van Buren and State Street. Retrieved from http://www.lib.niu.edu/2001/iht810125.html
Timeline of Important Transit Dates in the early years of Chicago Transportation [4] 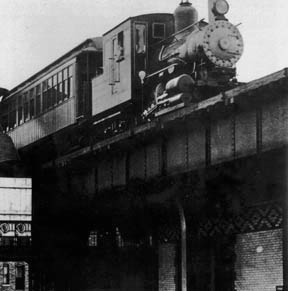 Figure 3. A northbound train on the rail, 1892. Retrieved from http://www.chicago-l.org/trains/gallery/images/wood/SSRTloco25.jpg 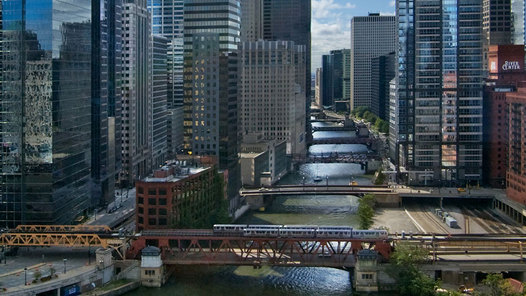 Figure 4. A row of Chicago Loop Bridges. Retrieved from http://www.chicagoloopbridges.com/
The Chicago Department of Transportation (CDOT) is responsible for the construction of over 300 bridges and viaducts in Chicago. Bridges and viaducts are a critical part to Chicago transportation as many of them are used as a source of access to different parts of Chicago. Chicago is also known to have many loop bridges (movable bridges). Loop bridges are essential because Chicago is a major transportation hub for waterborne traffic between the Great Lakes and the Mississippi River. Additionally, as the city increased in size, land based traffic was also increasing. Thus, Chicago had to construct movable bridges in order to serve both waterborne and land vehicles. [5]

The most photographed loop bridge in Chicago is the Du Sable Bridge located at N. Michigan Ave., while the most pedestrian friendly bridge is the W. Madison St. Bridge. With over 42,000 people crossing the bridge on a daily basis. N. Lake Shore Dr. Bridge contains the most vehicle traffic with approximately 112,000 vehicles crossing it daily. [6] 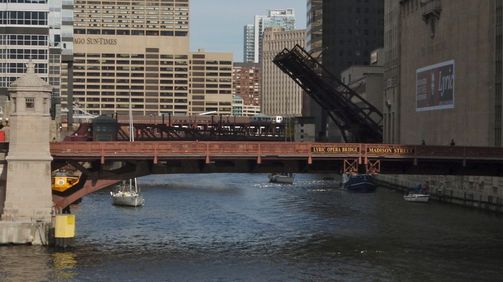 Figure 5. A lifted loop bridge in Chicago. Retrieved from http://www.chicagoloopbridges.com/ 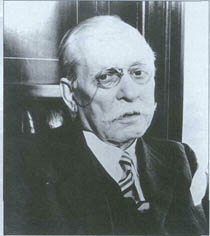 The Chicago Rapid Transit Company is a private transit company that was started in 1924 by Samuel Insull. This transit company flourished in the 1920s as it brought in annual revenues of about $20 million. The “L,” Chicago’s main rail line, was operated under the CRT, and brought in most of the revenue. However, once the Great Depression hit, the Chicago Rapid Transit Company failed to continue to gain sufficient revenue. The company entered bankruptcy in 1932, and it wasn’t until 1947 when the Chicago Transit Authority, a public entity, became the new owner of the “L.” [7]

Figure 7. CTA Logo. Retrieved from http://www.transitchicago.com/
The Chicago Transit Authority (CTA) is a regional transit system that was launched in 1947 by the state of Illinois and is still in service today. It is recorded to be the second largest transit system in America, right after New York’s Metropolitan Authority, and has played a major role in reducing carbon emissions and traffic congestion. For example, an eight-car CTA train that is at maximum capacity replaces about 600 cars on the road. [4] The Chicago Transit Authority provides both bus and subway services for the city of Chicago and its forty neighboring communities.

Most people in Chicago rely on the CTA buses as a source of transportation. The CTA bus service has about 1,900 buses that make over 25,000 trips daily. CTA buses make over 419 million-passenger trips annually. [1] This transit system operates all around the city of Chicago and consists of 140 routes, serving approximately 12,000 bus stops. [4]

CTA has also tried to make transportation even more convenient for riders by providing a 24-hour bus service called “Owl Service” However, the Owl Service is not available at all bus stops. [4] 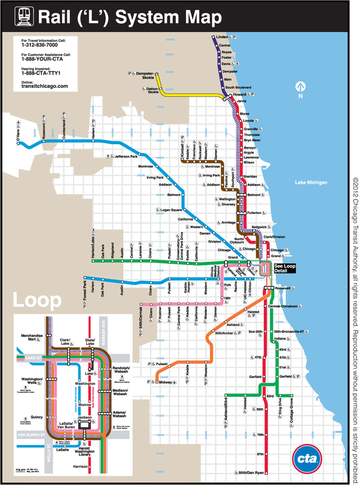 Figure 8. Rail System Map for The "L." Retrieved from http://www.transitchicago.com/
Many Chicagoans believed Chicago was destined to be the railroad city of America because the land in Chicago in flat. In 1892, the first elevated train, known as the “L,” was built. The “L” was created to help Chicagoans with the transportation problems that they were beginning to face. Many people were living further away from the city center as the city was expanding. Additionally, not many people were able to afford horse-drawn carriages. Thus, mass transit was the most convenient and reliant form of transportation for middle class and working class people.

As of today, the “L” system consists of 144 stations over a 240-mile track. The stations are divided into eight lines: the Red, Blue, Brown, Green, Orange, Purple, Pink, and Yellow Line. The Red line is a twenty-two mile route and one of the busiest roots. Perhaps this is because the Red Line leads fans to the Chicago Cubs and Chicago White Sox games. The Blue Line is the next busiest line and contains thirty-three stations. This line leads to Chicago’s O’Hare International Airport. Chicago is actually the first American city to provide rail transit access to major airports. The Red and Blue Lines operate twenty-four hours a day, seven days a week because they are the two busiest lines. The Brown Line is also known as the Ravenswood Line and is a short twelve-mile line. The Green Line runs in the south side of Chicago and is approximately twenty-one miles long. The Orange Line, or the Midway Line, is thirteen miles long while the Purple Line is only about four miles long and runs in the suburbs on the north side of Chicago. The Yellow Line, also known as the Skokie Swift, is only a mile longer than the Purple Line and also runs on the north side of Chicago. The Pink Line is about twelve miles long and runs along Lake Michigan. [7]

Future Plans and Proposals for the “L”

Although the “L” has been very successful, renovations and expansions are still necessary to sustain its success. CTA is currently planning on extending the Red, Orange, and Yellow Line of the “L”. More information on the rail extensions can be found on the CTA website. It gives descriptive information about the proposed extensions of each line. 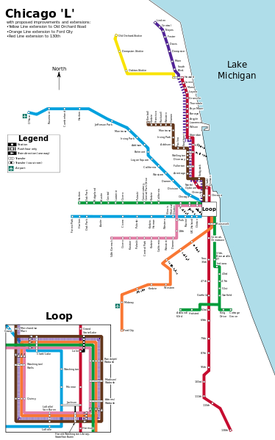 Although the Circle Line has been drawn out on paper, this plan has not yet been funded. However, CTA has been working on funding for the project, which is estimated to cost over $1 billion. [4] The Circle Line is considered to be a very complex project that will require political support on a local, state, and national level. Therefore, the Chicago Transit Authority is currently urging Chicagoans to support the Circle Line project by writing to their elected officials stating how the Circle Line will be beneficial to “L” riders.

The Chicago Transit Authority also has a sister agency that provides bus and rail services mainly in the suburban areas. The Metra is the sister rail agency and Pace is the sister bus service agency. The Metra and Pace both connect with CTA stops at many locations. 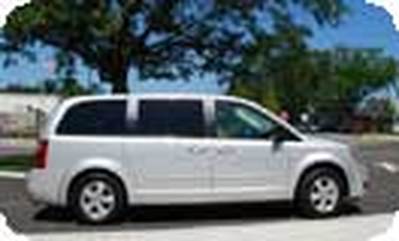 OTHER MEANS OF TRANSPORTATION

Figure 11. A bike rack installed onto a CTA Bus. Retrieved from http://www.transitchicago.com/
Bicycling

Bicycling in Chicago is also a very popular form of transportation. Chicago currently has over 170 miles of bike lanes and over 13,000 bike racks installed. [10] Thus, mass transits allow, and some are even designed, to carry bicycles for commuter convenience. For example, the CTA buses contain bike racks for passengers who can board their bikes at anytime of the day. The “L” allow passengers to board their bikes during certain hours and days of the week. The only times passengers are not allowed to bring their bikes onto the train are when it’s full of passengers or during weekday rush hours periods—7:00AM-9:00AM and 4:00PM-6:00PM. Additionally, indoor bike racks have been installed in over eighty CTA rail stations to shelter and protect bikes.

Taxicabs in Chicago are privately owned and operated, and licensed by the city. Taking the taxi is a convenient way to get around the city as there is a large amount of taxis available and is easy to hail, especially in downtown. Yellow Cab was founded by John Hertz in Chicago in 1915 and is currently one of the largest taxi companies in America. [11]

Wendella Sightseeing Company, a Chicago family owned business sightseeing and tourism venue, started the Chicago Water Taxi in 1962 as a rush hour commuter service. This water taxi runs between Michigan Avenue and the Northwestern Railroad Station. In 1999, Wendella began to provide water transportation service to commuters seven days a week.  Since the beginning of this Water Taxi business, the Water Taxi has successfully carried over four million commuters. [12] 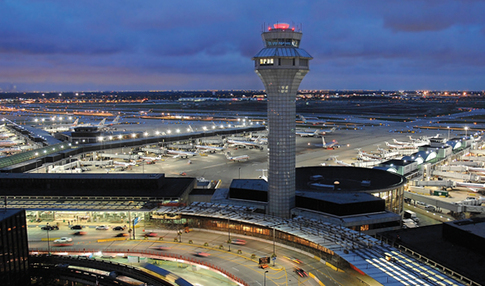 Chicago’s most popular airport is O’Hare International Airport. The site of O’Hare International Airport was originally Orchard Field—where an aircraft assembly line was located. However, in 1945, Orchard Field was selected to be the location for an international airport because it had four concrete runways. In 1957, a fifth runway was added to O’Hare and it became the world’s busiest airport by 1960. By the 1970s, this airport had handled over forty million passengers and became the second busiest airport in the world. With the high numbers of travelers at O’Hare, a pedestrian tunnel system linking the O’Hare airport, hotel, and parking structure together was constructed to ease the flow of traffic at the airport. In 1984, the CTA Blue Line was extended to O’Hare to make commute to airports for riders convenient and inexpensive. Today, O’Hare International Airport is currently under a Modernization Program that was implemented in 2005. The goals of the O’Hare Modernization Program (OMP) are to decrease flights delays and increase plane capacity by creating a parallel runway system. In 2010, a fund of $410 million was issued for the final phase of OMP. O’Hare will have a total of eight runways once the OMP is complete. There will be six parallel runways running on an east-west axis and two crosswind runways. [13] The elimination of intersection runways will reduce flight delays and increase efficient travels. 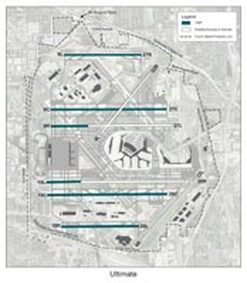 The Plan of Chicago addressed many aspects to the transportation part of planning in goals of gaining better functionality and aesthetics in Chicago. Half of the goals of the Burnham Plan dealt with transportation. Focus was directed towards developing a highway system, arranging systematic streets with fairly wide boulevards, and improving the freight and passenger railway systems. [14] For more information about the Plan of Chicago, see the Urban Design tab on this website.