Figure 1. Panorama view of Chicago across Lake Michigan. Jumper. (n.d). Chicago, Illinois [Photograph]. Retrieved from http://www.gettyimages.com/detail/photo/chicago-illinois-royalty-free-image/107985687
Business Facilities Magazine rated Chicago the #1 city in green innovation for its continuous works to improve metro transit ridership, city commuting, water supply, and solid waste diversion. [1] Mayor Rahm Emanuel describes sustainable development as “a city that spends less on energy use with each passing year, creates good-paying jobs in up-and-coming industries, responsibly maintains and upgrades its infrastructure, and ensures every Chicagoan has the opportunity to live a healthy and active lifestyle.” [2] Emerging as the nation’s railroad center in the 19th century to becoming an industrial and manufacturing center through the 20th century, Chicago today continues to flourish and lead in building a sustainable economy and vibrant community.

After the City of Chicago was incorporated on March 4, 1837, its ideal location allowed for an advantageous participation in trading possibilities created by the nation’s westward expansion. It became an important transportation center in 1848 when it built the city’s first railroad system, the Galena and Chicago Union Railroad, as well as the opening of the Illinois and Michigan Canal that same year. As railroad lines expanded and interlinked with more cities across the country, Chicago played a vital role as haulers of grain and livestock. Their presence gained them prominence in the grain market and meatpacking industries, helping to boost the city’s economy and population. Just as they were an important interchange point for freight traffic, they also had to accommodate the rapid growing population by building railroad terminals for immigrants and passengers traveling or moving to the city. Thus, it’s not a surprise that Chicago has and still continues to be the nation’s railroad center.

To keep up with the rapidly urbanizing city, Chicago had to improve the quality of life by addressing sanitation issues. Through the consent of the Common Council, the city devised the Chesbrough plan to build and implement America’s first extensive sewerage system by raising many of the streets five to eight feet high and then installing an underground sewer system. However, by doing so, the sewage and industrial waste was discarded to the Chicago River, which then flowed and polluted Lake Michigan, the City’s primary source of fresh water. This issue was temporarily resolved by adding tunnels that extended two miles out to Lake Michigan into newly built water cribs. Then in 1900, sewage contamination was fixed by reversing the flow of the Chicago River away from Lake Michigan into the Mississippi River.

The Great Chicago Fire of 1871 was one of the largest and disastrous events of the 19th century that destroyed large sections of the city due to the abundant use of wood for buildings. Realizing the need for sturdier infrastructures and materials, Chicago adopted modern constructions of steel and stone, setting standards for future development around the world.

Richard J. Daley’s son, Richard M. Daley, surpassed his father and became the longest serving mayor in history when he was elected in 1989 and served until 2011. It was under his skilled leadership that the public school system was improved and the high-rise public housing projects were demolished to clear the slums and make way for mixed-income housings for the community. He paid particular attention in beautifying Chicago by investing billions of dollars in constructing schools and libraries, but also creating parks, adding green to urban infrastructures, and planting flowers and trees across the city. [4] Daley helped turn Chicago into a sustainable environment, boasting with businesses, tourists, and culinary and art industries. He stepped down at the end of his final term in 2011 and former Illinois Congressman and White House Chief of Staff, Rahm Emanuel, was sworn in as Mayor on May 16, 2011.

The Chicago Department of Buildings (DOB) developed the Green Permit Program to expedite the processing of building permits that meet green building standards for an economically and environmentally friendly community. Approval for certification from the United States Green Building Council can be found under the Leadership in Energy and Environmental Design (LEED) Green Building Rating System. Chicago stands to have more LEED certified buildings in the nation with over 2,600 LEED credentialed professionals, demonstrating the City’s expertise in green design and construction. [5]

Completed in 2001, the Chicago City Hall was the first municipal building in the United States to feature a green roof and demonstrate the benefits of having one in helping to combat urban heat island effect while improving urban air quality. Incentives for adding or expanding a green roof can be found here: http://www.chicagogreenroofs.org. 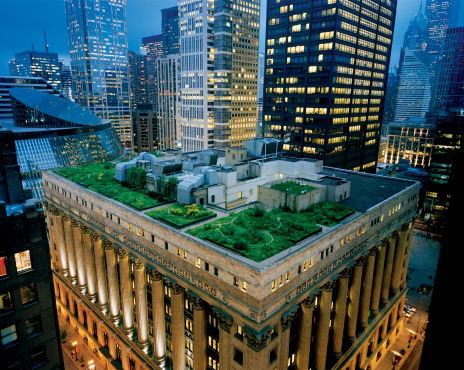 The Center for Neighborhood Technology (CNT) manages Chicago’s Sustainable Backyards Program, granting property owners to get rebates for creating a sustainable and environmentally friendly landscape right in their backyard. The goal of this program is to use green infrastructures, such as compost bins and rain barrels, to naturally process the storm water and reuse to irrigate the garden and lawn. By collecting storm water runoff into rain barrels and planting vegetation that absorb excess water, residents are reducing the amount going into the sewer system as well as cutting back the amount of organic materials that end up in landfill by using the fertilizer made from compost bins. Thus, it cuts down neighborhood flooding and storm runoff into Lake Michigan and promotes property owners to conserve water, combat climate change, and beautify the city. The City of Chicago offers a rebate of up to $50 for purchasing a compost bin, $40 for a rain barrel, $60 for native plants, and $100 for trees. [6] Rebates are subject to eligible retail locations and specific plants. Funding for this program is provided by the US Environmental Protection Agency’s Pollution Preventions Program and a USDA Forest Service and Great Lakes Restoration Initiative Grant.

“Adding Green to Urban Design” won the 2011 American Society of Landscape Architects (ASLA) Honor Award for Planning & Policy for its strategic approach to green solutions for a sustainable urban design. [7] With an emphasis on exterior elements that include streets, roofs, and open spaces, the plan intends to reduce surface temperature by expanding and preserving vegetated surfaces. The city so far has managed to plant over 500,000 trees in Chicago and plan to build approximately 350 more vegetated roofs in addition to the 250 buildings that already have it. [8] The  planning committee for this project has grown from just having city departments and public agencies to including many professionals working together to help both the City Council and Chicago Plan Commission with the guidance they need in managing urban design projects.

After voters’ approval in the fall of 2012, the City has partnered up with Integrys Energy Services, Inc. to provide lower monthly electricity bills as well as cleaner energy sources for households and small business owners. As more than 200 of the state's communities have already taken advantage of this deal, Chicagoans are able to put more money back in their pockets. Eligible customers are automatically enrolled in the program and can save almost 21% on their total monthly bill. [9] There is no fee to join or leave the program.
The streets boast another achievement in energy reduction and sustainable development through the wind/solar powered pedestrian lights and LED road lighting. Mainly funded by the Tax Increment Financing, this $14 million streetscape project aims to improve the infrastructure and quality of life by setting an example for future planning across the country. Chicago’s Sustainable Urban Infrastructure Guidelines are expected to be assembled in 2013, focusing on how to improve the environment and neighborhood without exhausting natural resources.