LAND USE  IN THE PAST

Daniel Burnham’s Plan of Chicago, introduced on July 4, 1909, has characterized Chicago’s zoning history since the origins of the city. The principles instilled within the plan were aimed make improvements in multiple fields including transportation, environmental, and social. The Burnham Plan created a sense of values and priorities for the planning of the city and as a result is determinant of the current zoning techniques. For instance one of the elements of the 1909 plan was to maintain the presence of open space for the health of city residents, future plans still make development of the Chicago Lakeview a priority. [1]

Land use for the city is extremely grand and complex. To get further information on present forms of land use for the City of Chicago visit Chicago's land use and zoning ordinances on amlegal.com. 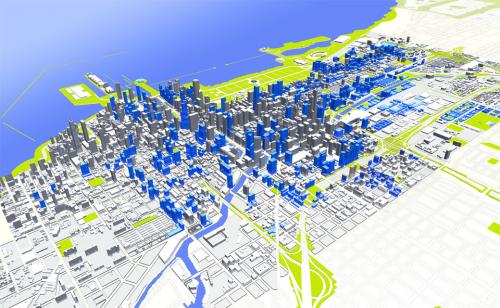 [Source: Spur.org]
Like all cities, Chicago has a very distinct method of zoning that aims to separate different districts from each other. These districts are carefully dissected and have multiple subcategories that assist in distinguishing the purpose of the region.

The downtown area mainly serves to facilitate economic growth for the city. The DC district is meant to characterize the nature of the city by serving as a central hub. These downtown cores are centers for business, communications, office, government, retail, cultural, educational, visitor accommodations, and entertainment.

Furthermore DC’s are also designated as mixed-use districts. In addition to the entities listed previously, downtown cores are also locations for residential developments. [2]

These districts are a part of the general downtown district but vary in regards to the nature of their infrastructure. DX areas participate in vertical growth and actively utilize ground floor spaces. [3]

Commercial – B and C districts

Community Shopping Districts on the other hand are more reliant on automobiles and will therefore incorporate a large amount of off- street parking as well as above ground residential facilities.

RT districts are made with the intent to create a mixture of housing facilities incorporating detached homes, two-flats, townhouses, and multi-residential buildings. A main component of these districts is that they are aligned with the same standards of RS districts. This includes manufacturing RT areas so that their density and building scale is in line with RS. 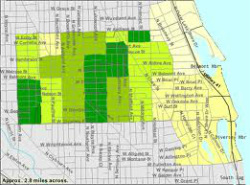 [Source: dibbern.com]
Lake Michigan and the lakefront of the city of Chicago is Identified as having significance in multiple arenas including environmental, recreational, cultural, historical, and communal. Title 16 zoning ordinance illustrates the importance of the area and mandates the protection of it based on its aesthetic and intrinsic value.

The Lake Michigan and Chicago Lakefront region will be divided into separate districts and several zones. The off shore zone which includes all  areas within the eastward of the State of Illinois lying in Lake Michigan. Public-use zone incorporates the areas that will be available for the general use of the public. 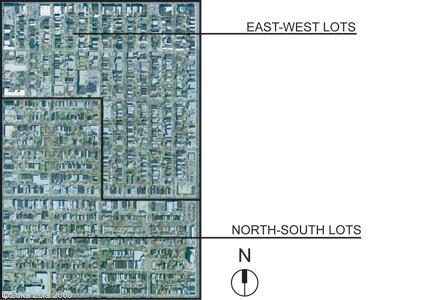 [Source: ZokaZola.com]
Currently the City of Chicago is working to implement a new form of land use that will stimulate economic development. A few of the goals are outlined as the following:


Maintain Chicago’s position as the economic engine of the region

This goal is oriented around transition and is related to smart growth and bettering the relationships between schools and businesses. Additionally, the plan aims to create distinction between districts and create a strong business district. Accompanied with creating districts, this aspect of the plan also focuses on enhancing downtown services that are already in place. [4]

The next goal is to facilitate dense residential growth in order to enhance the life of the city and utilize the urban infrastructure. The first mission is to once again focus on protecting current density regulations that were put in place by the 2004 Chicago Zoning Ordinance. In order to accommodate the densities support systems will be implemented to manage waste and noise pollution.


Incorporate Green Planning for Land Use

This mechanism focuses on making all new infrastructure up to silver and gold LEED standards. Additionally, smart growth patterns are to be done to better facilitate public transportation and reduce urban sprawl.

For more information on how the city of Chicago is incorporating green planning visit cityofchicago.org 2009 economic development and land use plan. [5]

Creating a political platform that will advocate for Central Area growth. This will incorporate involvement on the city, federal, and state level.  TIF districts will remain in tact in will also be expanded and updated. Redevelopment is a huge aspect of this portion of the plan. Their goals are to improve certain neighborhoods and districts to assist in commercial and market development, using public interest as the motivator for the capital projects. These projects are to be supplemented by general obligation bonds as well as support from state and federal governments.