In 1909, Daniel Burnham, Edward Bennett and the Commercial Club of Chicago established the Plan of Chicago. Although there was no specific goal on housing development, housing still sprang up on farmland near interchange corridors of industrial and office complexes in the next few decades due to the expansion of urban development to the suburbs.

Between 1910s and 1920s, Hull House was recognized as the best-known settlement house in the United States. It became the flagship of movement, including nearly five hundred settlements. Hull House offered a unique place for reformers to discuss about the different social issue on the local, state and national level. Several women right unions have been organized at Hull House.  These reformers proposed changes in their neighborhood and lobbied for state and federal legislation on social and economic problems. They helped to establish new policies on housing, working, education and public health issues which improve people’s living condition and protect the basic human’s rights.[2]
1930s

Chicago was mired in a housing crisis that demolished 18,221 units, and only built 7,619 new homes. Due to the Great Depression, there were 60, 517 families moving to Chicago to look for job opportunities. In 1937, Chicago Housing Authority was founded to operate the public housing development with the federal government. It assisted the first affordable housing projects for low-income families with Public Works Administration (PWA) under Roosevelt’s New Deal programs included Jane Addams Houses, Huila C. Lathrop Homes, Trumbull Park Homes and Ida B. Wells Homes. These public housings were constructed for low-income households unable to afford the usual rents. The New Deal was a series of economic programs in response to the Great Depression in 1930s. Home owners Loan Corporation (HOLC) and Federal Housing Administration (FHA) were two programs to assist homeowners and create a national standard for housing construction. Low-income Chicagoans received subsidies, grants, and federally-guaranteed loans to build housing. [3]
Click to set custom HTML
When Congress passed the Housing Act of 1949, substantial funding was provided for public housing. Chicago Housing Authorities was ready to propose sites for projects to be built on open land throughout the city. The white council members rejected plans for public housing in their wards. CHA planned to build housing only in black residential areas or adjacent to existing projects. They tore down the black slums and rebuilt new public housing on the sites. As a result, the south and west sides of Chicago became the concentration of public housing in the city. These public housings were operated similarly as private housing. CHA planned to use income from rent to cover the costs of maintenance and operations. The goal of the Housing Act was to provide 810,000 new public housing units within six years. Public housing advocates the difference between the old slums and new public housing, but the comparison was problematic for the successive forces of displacement and replacement. [6][7]
1960s

Robert Taylor Homes was another significant public housing project of CHA locating at the south of the city’s central business district which was the boundary of “black belt” ghetto in 1962. It was the largest public housing building with over 4,400 apartment units in the twenty-eight 16-story high rises building, at 2 miles on South State Street. It was named after the first African American chairman of the Chicago Housing Authority. Over 90 percent of residents were African American. Similar with Cabrini-Green, Robert Taylor Homes was the largest concentration of poverty with the issues of gang violence, drugs and crime. Most residents were unemployed and needed public financial assistance. Due to the chronic federal budget crisis, problems on maintenance and social services appeared. The living condition was getting even worse. In 1960s, the condition of racial segregation in public housing reached to a crisis point when the Civil Rights movement was practiced in Chicago. The Chicago Freedom Movement successfully made agreement on housing development with the CHA. They agreed to build open housing in the scattered site in order to diverse the neighborhood. [9]
Incidents about Racial Segregation and Low-income Households

By 1970s, CHA was still facing many problems and conflicts caused by racial segregation.  Hills v. Gautreaux was the Supreme Court case in 1976 about the uneven distribution of public housing between the black and white neighborhood. The Court finally decided that the Department of Housing and Urban Development had to offer housing subsidies under Section 8 to low-income residents in order to allow them to seek for private housing. Furthermore, the Brooke Amendment was passed which regulated the supply of public housing to lowest-income families. Only 25 percent of residents’ income was charged as rent which caused the failure of support operations and maintenance of public housing. During 1980s, a rental subsidy program was passed due to the severely high concentrations of poverty and neglected infrastructure. Owing to the failure of the previous public housing plan, CHA was called as the worst managed housing authority in the states in 1980s. Budget from HUD was reduced due to the failure of funding investment in public housing. The Chicago public housing market again fell into tension of shortage. There were 24,000 people waiting for available apartments and 56,000 households waiting for subsidies from CHA Section 8 vouchers. [10]

The Plan of Transformation

In 2000, Mayor Richard Daley led The Chicago Housing Authority to implement The Plan of Transformation with the approval from the U.S. Department of Housing and Urban Development aiming to demolish the high-rise development and implement the comprehensive rehabilitation with the construction of new mixed-income developments. The plan aimed to provide 25,000 units of housing. Over 56,000 of resident would be relocated. The redevelopment of Cabrini Green began since 1990s. There were thousands acres of former industrial lands converted for office, retail and housing use. Demolition of Cabrini-Green was completed in 2002. By the end of 2002, forty-two out of fifty-one high-rise public housing were demolished. The subsidized development of mixed-income housing is the ongoing project on the site. Robert Taylor public housing was closed and demolished in 2005 with HOPE VI federal funds. There were 2,300 new low-rise residential housings, community facilities and a number of retail and commercial space replacing old high-rise public housing. [12] 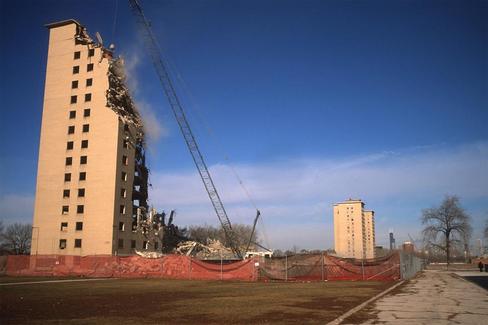 Figure 11. USA. Chicago. The architecture of racial segregation. 2003. USA. Chicago. The architecture of racial segregation. 2003. USA. Chicago. The Robert Taylor Homes project, on the south side, containing 4,321 apartments represented the apogee of American apartheid. In 1962 the Robert Taylor Homes, with 28 sixteen floor tower blocks at the time the largest public housing project in the world - represented just about everything that has gone wrong with public housing in Chicago. Living in one of those buildings today means facing the constant threat of gangs, shoot-outs, and drug-related violence. In the 1980s 11% of the murders in the city were committed there. So wrote the Italian sociologist Marco d'Eramo in 1999. Today, in 2003, they are being demolished. I watched a huge iron ball attached to a crane demolish one of the last 3 remaining Taylor homes. (2003). Retrieved from: http://www.magnumphotos.com/
2010s